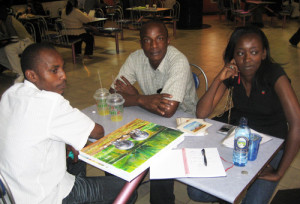 Albert, his Brother Kelvin Malack, and my wife Liz

In our recent trip to Kenya we finally met with Albert Lizah and his artist brother Kelvin Malack. It was great to meet up with them! Both Liz and I were taken aback at how young these guys are – and so talented!

Albert Lizah and his brother went to primary school in Naivasha, Kenya, and had the good fortune to live next to one of Kenya preeminent artist, Sane Wadu, who became his mentor. Though Wadu was a strong influence, it was only when Lizah and Malack started painting together that they started to develop their own technics. As Lizah said when we spoke, ‘We paint under one roof with one mind, and train each other.’

Lizah went to college and studied automotive engineering, and when he became busy with painting he encouraged his brother, who had dropped-out of painting, to join him again. Lizah said, ‘The best thing is to have an artist who is a critic, and who also an artist.’ He added, ‘To us, every painting is a masterpiece!’