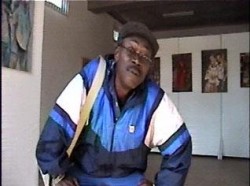 Ash is a self-taught artist who has been painting full time since leaving his job as a Research Assistant at the Laikipia Research Programme in 1990.

His abstract paintings, flowing with passionate strokes, touch on ecstasy, spirituality, insanity, sensuality, and are vibrant with philosophical thoughts.

One of his paintings was selected for the Millennium Art Collection with the theme “2000 Resources to Love the Earth” and is on display in a prestigious art gallery in The Hague, Netherlands.

From Contemporary Art in Kenya 2006: Ash Uman, a born troubled soul, does not settle for the easy answers in life perhaps on account of the fact that he is a child of the Idi Amin period in Uganda. After years of questioning the art scene’s simplistic notions of African art, he has come full-circle to settle scores with himself by revisiting and questioning what his art is all about.

From Artistic Perception of Home, Nairobi, 2002: Born in Kampala, Uganda, in 1965, Ash Uman, attended secondary school in Nairobi before taking up different jobs, among them that of a cartographer. He considers himself a self-taught painter. Since 1989, the date of his first solo exposition, in Nairobi judiciously entitled, ‘Strokes for Thought’, Ash Uman has continued as a professional painter who doggedly refuses to make any concessions to market forces. Since his first painting in which he appropriated techniques and forms between cubism, and free figuration and abstraction. Ash Uman has progressed in his own independent and evolutionary manner.

In the past few years he has concentrated on a lyrical form of figuration that places man, often represented as part of a group (see paintings below), on center stage. His themes are not visibly African. Ash Uman restrains from representing subjects with fixed identities. A conceptual artist, Ash submits his practice to a process of constant reviewing. He quite likes theorizing about his progression and his art, which must be considered as an uneasy questioning of the reality of East African cultures and fight for a form of contemporary African painting which refuses folklore just as much as western artistic dogmas.

If you are interested in any of Ash Uman’s paintings, you can Make an Offer by using the Contact Page or by emailing me at: todd@insideafricanart.com. Or, better yet, go to the Purchasing Page to make a purchase!

Whats the difference between ARTIST and African dictators who cling on power till death DO WE PART?.Painters, Musicians, creators etc. who progressively cling on the Art throne till death. Look at Picasso, Leonardo, Franco,Michael Jackson, etc.This is it!. Its genuine shit.There are plenty of new good artists, good musicians, new leaves of this TREE, LIFE. They need a chance, I dont need Ash Uman in news prints or any other media facet. There is a brand new Ash somewhere,a brand new you elsewhere. I let go off it. Bill Gates is a genuine model, nothing to do with money or riches. stop needing and live.

From ‘Contemporary Art in Kenya’:

After his primary school in Katwe Uganda in 1975, young Ash Uman moved to Nanyuki, Kenya, where he did his secondary education up to sixth form at Nanyuki Boys Secondary School. For his A-levels Ash Uman took Biology, Physics, Chemistry and Subsidiary Math. Apart from the usual Art and Craft in primary school, art had not been in the scheme of things for this child of dictator Idi Amin’s time.

Ash Uman was employed by a Swedish Development funded project Laikipia Research Programme as a research assistant. Here, during a Christmas Party, Ash Uman caricatured his boss nursing a squashed pawpaw in the Visitors’ Book. His boss was not flattered, wondered aloud what cartoons had to do with research, and fired Ash Uman. For two months following the sack, Ash Uman kept himself busy painting signboards in Nanyuki. It was in the second month that he received a message from his boss to report to the research station. Ash Uman was rehired as a cartographer trainee.

Halfway between his three and a half yearlong contract, in 1993, Ash Uman booked a show at the Goethe Institut aptly titled “Strokes for Thought”. The late Ruth Shaffner had rejected his work saying it did not look African. He was painting symbolic pieces and critical cubist pieces that had unusual spatial arrangements. “Strokes for Thought” was a highly critical show with pieces challenging the status quo. He painted Africa as a naïve virgin shyly waiting for the western Messiah to get things going for her. He expressed his raw anger and rebellion in red color fields played against blues in pieces that evoked the ominous heavy-laden storm clouds of a tropical afternoon storm. Ash Uman says that his critical questioning of all things, including what is African art, his outspokenness in general, led to his being banished from the Gallery Watatu from this time onwards. “I became a total vagabond doing my own things at my own studio in Githurai 44, and then I moved to Fedha Estate and finally ended up settling down in Langata for ten years. I am currently in Adam’s Arcade”

Ash Uman is a born troubled soul who does not settle for the easy answers in life. This is perhaps on account of the fact that he is a child of the Iddi Amin war torn period in Uganda. Interestingly after years of questioning the art scene with its simplistic notions of what is African art he has come full circle to settle scores with himself by revisiting and questioning what his art is all about.

“Our work here does not say where it is from. In the early days of my art, I did many symbolic and cubist-like pieces. That could be done by any artist from anywhere else in the world. I even did some masks in the past but where does this mask making and painting logically end? We need to give the mask a face-lift to answer the question ‘where does this work come from?’ That is why I am trying to do masks in a personal way as opposed to the acceptable so-called primitive and barbaric way. I am not good at selling my work and so I am more concerned with trying to create a bridge. Our artists and art promoters did not do this in the past. I want to create something weird, something that is uniquely mine yet rooted in our shared whole. It like a tree whose trunk, branches, twigs, leaves, flowers, seeds and fruit is an organic whole linked to the earth by an elaborate root system.”

In this artistic quest (also evident in his music) to examine the past and yank out of it a new style, a new art, a new movement – is the artist not being more like the Western artists always searching for some way of turning their art world upside down like Picasso did?

“I want to live the way I think; the way that satisfies me. I would like to be me and not hope for something else to make me what I am. Does an artist create his work or the other way round? This is a puzzle that every artist should try to resolve. All these organizations in the business of promoting our art are doing a lot of disservice to our future. We must always remember that they are here to promote their western markets in the end. They are here to cater for western interests. You get all these sponsorship to go for exchange programs. Do you pause to ask yourself whether this is where you want to go? I go where I want to go, when I want to go…”

In 2006 Ash Uman wanted to go to Spain. However, before going to Spain for a show he had to go to the Kenyan coastal town Mombasa to get a different setting. Ash Uman says the light at the coast is special. “The sun rises early and there is less pollution than Nairobi whose light is tinted with smog and the skyline broken by high rise buildings. I am going to that natural frequency of light where greens are greens and not gray greens…”

Nevertheless, Ash Uman’s trip is not the tourist type with the paintbrush substituting the camera. His trip is intended to give him the launching pad he needs to dig into the past and take off in his yearned for new direction. This new direction will see him make use of masks less like museum pieces by incorporating them into his compositions like live characters akin to the masquerade dancers. I particularly liked The Sad, the Thinker and the ‘Decision. Here three figures literally take off their masks. The first is just donning off a mask whose top tapers off elegantly to give hints of the pharaohnic headdress, the elongated head of the Mangbetu women. A pendulous nose droops down the middle of the mask-face sleepily quite unlike its assertive phallic symbol of the knobkerries and all manner of staff for elders and the ruling elite of many an African people. There are three faces in this single mask figure. A yellow haired woman seems to be doing all the thinking and the hand on chin gesture confirms this in spite of the fact that it is too masculine. The mask proper is an angular lipped two-in-one face whose unity into a third unifying face is not disturbed by the all-pervasive though crestfallen phallic symbol nose. With the overall figure sitting hunched up in some sort of despair there are some hints of the all too familiar heart rending emotions found in love triangles. Is this, then, the echo of the larger three “masks” with a femme fatale in the middle of the sad and the quizzical figures? I suspect the story is much larger than this and might be informed by the global power play characterizing the twentieth and twenty first centuries; and then again….

There are no hints of this intended leap into the world of masks in the 2005 Constant Reassurance although Uman’s work between 1999 and 2001 is full of masks and mask-like hints. What is common is the predominantly blue canvas and the exploration of the human condition. As Ash Uman puts it, “One must always be reminded that the gloomy times are not forever, though how soon, remains in the hands of Hope and Time”