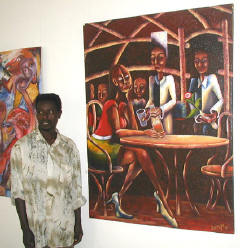 Kamuyu in front of his painting at Banana Hill Gallery

Martin Kamuyu was born back in 1972, at a place called Rironi in Limuru, of Kiambu district, in central province of Kenya. In 1978 he started school at Nyoro Nursery School and after two years he started his primary academic for eight years whereby later he joined Ruiru High School for his secondary education. Unfortunately, after his three years in high school his mother suffered a stroke. Kamuyu had to drop out from school in order to take care for his younger brothers and sisters as he is the first born of his family. 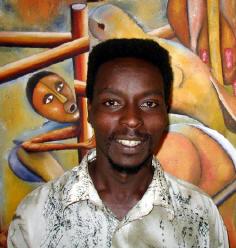 After his domestic work every day, Kamuyu recalled an art interest while in his primary school, and there he started with sketches which he could later decorate with different plants leaves, soil, charcoal, and egg yolk. Fortunately enough, his father visited Shine Tani (another artist featured on this site), Kamuyu’s cousin for financial assistance. Whereby, he was astonished to discover how Shine was earning a living. Kamuyu’s father remembering what his son was doing in art back home. He invited Shine to visit his cousin to see whether what he doing was for any good or hope. In August 1992, Shine visited Kamuyu and he was impressed by Kamuyu’s work, and encouraged him to continue. Moreover, he took Kamuyu with him for accommodation in his house and fully supported him with painting materials, food, and shelter.

After Kamuyu did some few pieces, Shine selected six of them and took them to Gallery Watatu, where the late 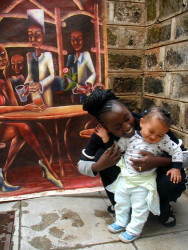 My wife and baby girl next to an original Kamuyu

Ruth Schaffner purchased all of them. Later, Kamuyu took several more and after payment he started living on his own. Until today Kamuyu lives and works on his own. He has been doing research on art, trying to search for his unique style of which he has got and satisfied. His works are more of impression of daily lives, culture, and educative. He says art is his career as he was lucky. Once employed as designer and painter in Product Design And Development Center which he later quit for his artwork. He says he will start a design center at the Banana Art Studio for furniture.

Kamuyu last year was employed by a Gallery called Ramoma ( Rahimutulla Mesuem Of Modern Art ), as an assistant coordinator of projects – as example: ‘Healing Through Art’ at Kenyatta National Hospital and the Art Market At the Village Market. Kamuyu enjoyed working at Ramoma since it is a field he belongs in of art.

Art for him is something of great importance to offer the world – without it his head and mind can explode with ideas. Kamuyu is a member of Banana Hill Art Studio, a group he has worked for as its secretary since its formation. He is termed as a visionary of the group for his commitment and dedication to the group. He says a lot will be achieved by his group through him if his live is long in this world.

I’m sorry but the paintings below are all sold. I am trying to procure more paintings by Martin Kamuyu.