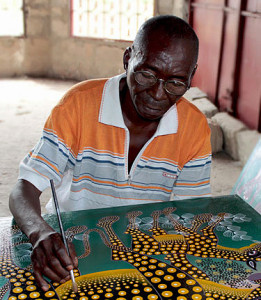 Noel Kapanda is may be the least- known Tingatinga artist in Dar es Salaam – but he should be the best known!

Noel Kapanda is maybe the least known Tingatinga painter in Dar es Salaam but he should be the best known.

Noel Kapanda was one of the first painters who entered the Sister Jean´s Nyumba ya Sanaa – a Cultural Heritage Center bequeathed by founding President Julius Nyerere. Kapanda was born in Ndanda (South Tanzania), in 1964, as one of more than 10 children. In 1979 he moved to Dar es Salaam where he painted with many TingaTinga artists as a member of the TingaTinga Artists Cooperative (TACS). After his first wife passed away, he remarried and has four children. Noel Kapanda paints in the traditional Tingatinga style, as well as the life in the African villages.

If you are interested in any of Noel Kapanda’s paintings, you can Make an Offer by using the Contact Page or by emailing me at: todd@insideafricanart.com. Or, better yet, go to the Purchasing Page to make a purchase!